The problem with family or friends leaving a dish for a stroke survivor to heat up in the microwave is that the thumb knocks the lid off when you pick up a dish one-handed.  Heating uncovered food in the microwave makes a mess. 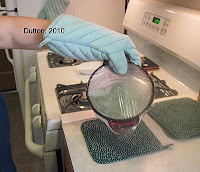 When I take a hot dish out of the microwave my sound hand is protected by a hot mitt and my hot mitt is protected by plastic wrap on the contaner.  You might wonder why a stroke survivor would use plastic wrap when it gives people with two good hands a run for their money.  Before I started using plastic wrap I had to wash my hot mitts repeatedly.  The mitt would get dirty when I slid my thumb into the dish so I could get a firm grip on the edge. 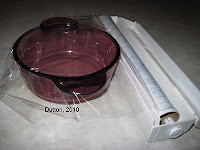 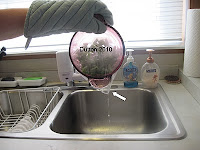 Using plastic wrap also means I do not need a food strainer.
I use a hot mitt on my sound hand to hold he dish over the sink to let the water drain out.  The arrow is pointing at a flap of plastic wrap that is open.  I did not do this.  The water did it for me.
I lose a couple of pieces of small food now and then, but keeping my sound hand safe while handling hot dishes is priceless.
homeafterstroke.blogspot.com
Posted by Rebecca Dutton at 8:00 AM 3 comments:

An article in Stroke magazine made me angry.  The authors said they could predict independent walking three months after a stroke based on early status after the stroke (1).  These predictors included younger age, good leg strength, good sitting, continence, no cognitive impairment, no neglect, and independence in activities of daily living.

What made me angry is that the authors recommended these data be used to decide who should get rehab and who should go straight to residential care (1).  Data that describe groups of people cannot accurately predict which group a specific individual will end up in.  For example, data that says a chemotherapy treatment is 80% effective does not tell you if a client if will be in the 80% that will be cured or in the 20% that will die.

There is no such thing as a perfect prediction because unaccounted for variables can change an outcome.  For example, years ago I went to the nursing floor and found two nurses transferring my client from a wheelchair to the bed.  When I asked why I could transfer him with minimum assistance but he needed two nurses to do it he said "therapists make you do things for yourself and nurses do things for you".  He did not show the least bit of embarassment when he said this.    I wondered which rationale he applied to his wife.

To withhold care because of early status is *****!   It it fairer and more accurate to make decisions based on the amount, speed, and consistency of improvement.  homeafterstroke.blogspot.com

An Unexpected Source of Joy

My parents never had a newspaper subcription so I did not grow up reading comics.  However, I am glad gocomics.com/comics/a-to-z gives me free access to comics from several newspapers.  My 1st favorites are curmudgeons like Garfield and Shoe.  Their cranky mood mirrored how I was feeling during the covid-19 pandemic.  My 2nd favorites are nitwits like The Wizard of Iz.  The endless sillyness of nitwits is amazing.  My 3rd favorites are family stories like For Better or Worse.  Teenage and pre-school drama is a lot funnier when it is not happening to you.  Besides,    I want to know what happens to these characters I know so well.  My 4th favorites are comics that make me reflect on life like Speed Bump.

I was surprised to learn I do not like black and white comics.  I need a pop of color to cheer me up.  I also do not read comics with long dialogue printed in small letters.  After my cataract surgeries I chose lens that help me see mid and long distances.  When driving I need help reading street signs.  Reading comics with small print force me to squint even when I increase the font size          - not fun.  homeafterstroke.blogspot.com

Email ThisBlogThis!Share to TwitterShare to FacebookShare to Pinterest
Labels: depression

Trying Not to Gloat 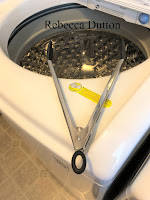 I do laundry with the help of 2 cheap pieces of equipment I bought at Walmart.  My washing machine is so deep that to reach all the clean clothes, I have to dive into the machine with my hips resting on the rim and my feet dangling in the air.  So I use tongs designed to handle food to reach the bottom while I keep my feet on the floor.  To keep frustration from ruining my success, I keep these tongs in the laundry room where I can grab them without hunting for them. 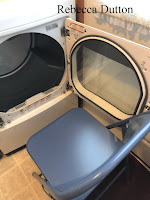 My dryer is so deep I have to lean down and stick my head in the dryer to reach all the dry clothes.  To prevent a fall I put a cheap folding metal chair in front of the dryer.  Sitting an a chair when I reach for clothes in the back eliminates a fall hazard.  I keep this chair folded and propped against the laundry wall.

I try not to feel smug because I did not buy high-priced adaptive equipment from a medical catalogue.

Posted by Rebecca Dutton at 9:00 AM 3 comments: